Building the present from the past

All airports, he had long ago decided, look very much the same.​ It doesn’t actually matter where you are, you are in an airport:​ tiles and walkways and restrooms, gates and newsstands and fluorescent lights.​ This airport looked like an airport.​

Each scene of a movie (or paragraph of a story) generates a pattern of activity in the viewer’s brain, and I showed in my last paper that changes in these activity patterns correspond to new events happening in the story. But it is still mysterious exactly what information the brain is keeping track of in these activity patterns. We know that movie and audiobook versions of the same story generate similar patterns in many brain regions, which means that the information must be pretty abstract. Can we push this even farther? Can we find pattern similarities between different narratives that describe events from the same “template”?

In my new paper we studied a kind of template called an event script, which describes a typical sequence of events that occurs in the world. For example, when you walk into a restaurant you have detailed expectations about what is going to happen next - you are going to be seated at a table, then given menus, then order your food, and then the food will come. Our hypothesis was that some brain regions would track this script information, and should look similar for any story about restaurants regardless of the specific characters and storyline of this particular narrative.

We then looked for brain regions that seemed to be tracking the restaurant or airport script during all of the stories, and found a whole network of regions:

An especially important region here is the medial prefrontal cortex, which is the part of your brain right behind the middle of your forehead. We found that this region only tracked the script when it made logical sense - if we scrambled the order of the script (e.g. showed people getting food before they ordered) then it no longer bothered to track what was going on. 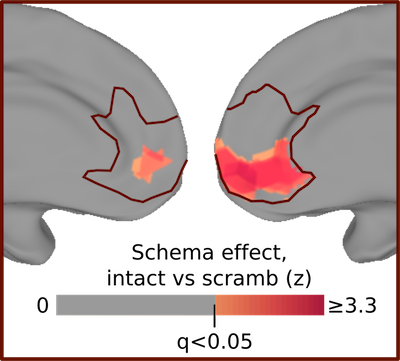 I also used some of the analysis tools I previously developed for matching up brain data during perception and recall of the same story to find correspondences between different stories with the same script template. For example, I can use brain activity from the superior frontal gyrus to figure out which parts of the “Up in the Air” story and the “How I Met Your Mother” story take place in the same places in the airport. Here are snippets of the stories that show similar patterns of brain activity:

I’m currently analyzing some additional data from these subjects, collected while they tried to retell all 16 stories from memory. Our hypothesis is that these script templates should also be useful when trying to remember events, since they give us clues about what kinds of events to search for in our memories. I’m also fascinated by how these scripts get learned, and am hoping to study this learning process both in adults (who are learning a new scripts in the lab) and in children (who are learning real scripts over the course of years).